There have been loads of updates today:


Most of these were up to an 8th beta test version.

I don't have an Apple Watch, so that isn't a problem, thankfully but there is a rather large load on the internet connection trying to update everything.

I've updated Apple TV and my iPhone but I'm not updating my MacBook Pro because I can't get a number on the size of the update, and I'd rather not pay overage charges.

Besides this, iWork has been updated on the computer and the phone.

The most significant change is the new file system: APFS.  It's live on iOS devices.  I wonder if it's working on the Apple TV or Apple Watch.  It should be interesting to see how the phone changes with a modern file system, rather than some relic of the 1980s, 1990s, and 2000s with the electrodes sticking out of the neck to remind people of the creature they've been using.

I'm not noticing a huge difference at this point, and the phone seems to be working as well as it was--no glitches.

Better performance is always appreciated, so hopefully, that happens.  When the file system can be implemented on my MacBook Pro, I'll probably be much happier.  I'll be ready to update macOS Sierra in a few days.
Posted by Sakamoto Nobuyuki at 15:55 No comments:

UPS gives me a headache

I only use UPS when the seller does not give me another choice.  This happened years back when I ordered something and the shipment was artificially held at their Seacaucus location.  There were two arrival scans and two departure scans.

Prior to January 1, 2017, I had a shipment on the way, and they did what they could to delay it and then, didn't put it on the truck the morning it was supposed to be delivered.  I mentioned something on Twitter, asked if I could pick it up.  I got a call from another office in the area, but not where the shipment was sitting, that it was still on time and that I was mistaken. 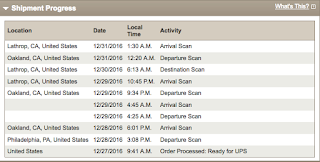 A few days ago, I placed an order that was split between FedEx and UPS, both for Wednesday, March 15, 2017.  Over the weekend, UPS decided to change it to a later date--4 days for their 3 Day Select shipping. 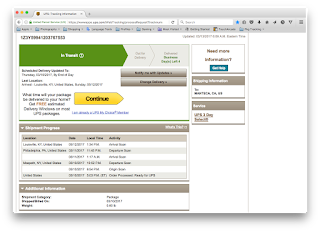 A little while ago, I put the screenshot on Twitter with an unhappy message for them.  Someone looked at the shipment and fixed it, putting it back to Wednesday instead of Thursday.  UPS support replied to me as if I was a moron that shipping does not include Saturday or Sunday--duh.  It shows that the change was made almost exactly after my Tweet.  Hmm... 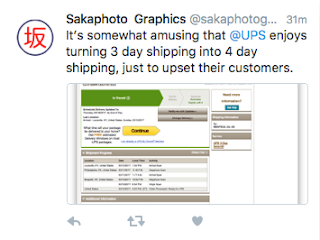 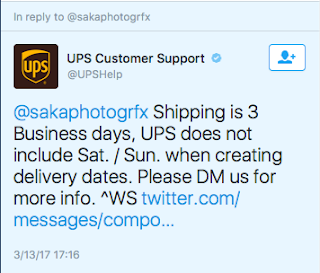 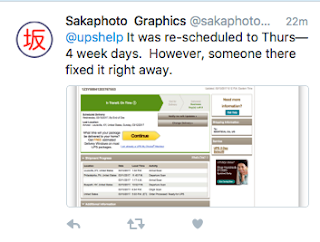 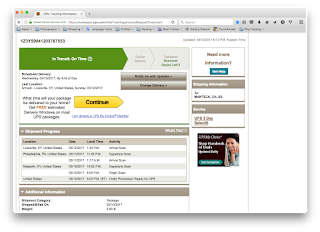 I can appreciate that they don't want to give away the business--that they want to make money.  I'm not against that.  Why artificially hold back shipments?  Fedex often gets shipments to me ahead of time. 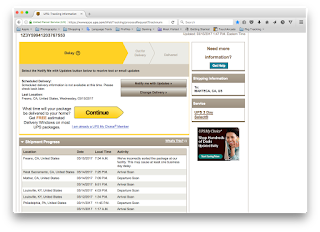 Here is a new one.  They've made sure that I won't get it on the originally scheduled day.  They got confused when sorting.

Update 2018.12.08: I've had a few packages shipped using UPS.  Their information is still inconsistent and I never know whether I'll get the package when they say--if they've set a date.  This week, I waited for a package that was supposedly not delivered to UPS for several days.  Then, suddenly, it had been delivered to my address.

Why doesn't FedEx have this problem?  Even the U.S. Postal Service seems more reliable than UPS.
Posted by Sakamoto Nobuyuki at 17:55 No comments: