Today, as you'll see, I have a lot more equipment, having added micro Four-Thirds equipment from both Olympus and Panasonic.  I also have the latest APS-C based dSLR from Nikon, the D7200.

I'm quite pleased to say that the E-1 is still working and the initial lenses are quite useful, especially after photographing out in three hurricanes.  The specifications of the E-1 aren't great for 2015, but there was some concern about the E-1 from the beginning anyway.  It worked just fine.

As of now, my equipment lists are as follows:


Of course, the Four-Thirds lenses can be used with the Olympus MMF-3 adapter, which is also weather-sealed to match the Olympus ZD HG (high grade) and SHG (super high grade) lenses.

There was a flirtation with the Panasonic GH3, and I got the MMF-3 because there just weren't many native mount high quality lenses, and I wasn't exactly thrilled with thrilled with the 35-100mm f/2.8 lens.  Truly, the 35-100mm f/2.8 seems to have been the product of another, lesser company, even differing from the Panasonic 12-35mm f/2.8 lens.  The GH3 is technically great equipment.  It was just a pain for me to use, especially with sunglasses.  The GH4 changes most of that and improves and expands the video capabilities.  I pull out the GH4 first.

Most of my video work has been done with the Olympus 12-40mm f/2.8 lens on the GH4.  This is not a stabilized lens and it isn't on a stabilized body, but I've done well with the combination.  I've not had much success with the 35-100mm f/2.8 lens but used it at a recent skate park competition and it was sufficient.  (At a previous competition, the video is practically bouncing, after the latest lens firmware update.)  The 12-35mm f/2.8 works well enough but that extra 5mm of reach with the Olympus lens makes a huge difference.  You can tell me that 24-70mm f/2.8 is sufficient on a 135 Format camera, but when it comes to video, it isn't.  A 3x or 4x zoom would do wonders here, even if it didn't have a constant maximum aperture.  The Panasonic-designed 15mm f/1.7, approved by Leica to wear its name, has been good, even in the dark and the Olympus 8mm f/1.8 fisheye lens has been useful in such conditions. 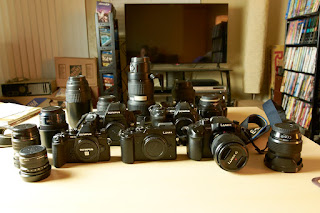 Even though the Panasonic GH4 may seem large, it's smaller than the Olympus E-1, which was right-sized, for me, at least.  The grips of the dSLRs and the GH4 are very good, while the E-M1 is uncomfortable and the GX8 is good.  The E-M1 is dwarfed by both dSLRs.

Each of the bodies is weather-sealed, and most of the lenses are, also.  This apparently added bulk (as did the heat handling) to the GX8 over the GX7, but the handling is better with the size increase though the battery power is not.

One of the dSLRs and two of the MILCs (mirror-less interchangeable lens cameras) have sensor-based image stabilization, and the GX8 has the Dual I.S. to coordinate with the lens' OIS, when available.  I wish Panasonic added Power OIS to the 15mm f/1.7 for better work in bad lighting.  The new 42.5mm f/1.7 has it.  I'm still looking for great lenses and haven't found any for micro Four-Thirds, but these will do, and the MMF-3 will allow me to use the ZD 14-35mm f/2.0 and 35-100mm f/2.0 when necessary.

Strangely, having got the Nikon D7200, I'm still finding the micro Four-Thirds equipment quite useful while learning the digital Nikon way of doing things.  People have commented in the past that using Canon or Nikon equipment was the only way to go.  There are advantages, but I haven't experienced any of them yet. Since the sensor of the D7200 has a similar pixel density to the 16MP sensors in the GH4 and E-M1, I couldn't expect much better image quality.

If Panasonic could work with Olympus to implement Olympus' auto focus and face recognition for stills, it would be a huge improvement to still photography in the GH4.  Adding their 5-axis image stabilization would be difficult, given the heat dissipating orientation of the body for video.  They'd probably have to increase the size of the body to make it all work safely.  This would make the resulting camera body practically perfect, for me, anyway.