I've been driving for quite a while, legally, and a bit before I was legally able to drive.  My first experience in the driver's seat was in Sunnyvale, California on El Camino Real, a road I use occasionally.  I must have been 3 the first time and I broke the turn signal lever as I moved it wildly.

I got my first car Christmas Day 1976, a 1967 Pontiac Firebird with a lot of little problems.  In those times, we had a lot of huge cars.  My mother had a 1970 Lincoln Continental 4 door with 7.7 liter engine.  It wasn't as pillow-y soft as other huge cars on the road, but it wasn't a race car either.  My driving instructor was surprised to see it.  We needed to inform my mum that I was driving that day, so we stopped next to her and told her.  As we pulled away, my instructor said "You're going to drive that?"  Of course, I already had driven it.

The two American cars were not exactly ready for the road.  I remember my 1967 Firebird being passed by a Volkswagen Beetle back around 1979.  The Mustang had a Pinto engine with what seemed a 10 minute add-on turbocharger rigging.  It would go to 130 mph but it took (almost) all day to get there, and when I got rid of it, it had 5 cracks in the cylinder head. 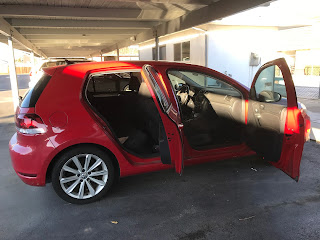 Since the Golf TDI has been returned to Volkswagen, I've been looking for a suitable car.  The most likely brand would be Mazda, but the previous Mazda 3 hatchback is what I like and they're difficult to find, and other than the Mazda 2, they don't really fit me.  Subaru would be interesting, but they're too expensive, as I'm trying to get as close to US$10,000 as I can.  (Sadly, I'm coming from a US$27,000+ car, so nothing will really compare.)

I narrowed the list to cars available from the current dealership or those from the same company, since I know what to expect from their service departments.  Since I'm not willing to get another Volkswagen, it came down to Nissan and Hyundai.

The Nissan Versa Note, which sounds like a collaboration with Panasonic on a notebook computer, is a good size for me, and not horribly expensive.

The other choice is a Hyundai Accent hatchback.  It's about the same size outside but with a compact car rating, not subcompact because the interior is a bit more roomy.  I considered an Elantra, which is bigger, and a few with the boot/trunk are less expensive, but the model seems bigger than I want to go.

There is one of each that is a bit about US$12,000.  I would have preferred the least I could spend but getting a car with a warranty is important.  Getting something I like seems somewhat important also.

These cars are about the same size as my 1999 Volkswagen Golf on the outside but not so much on the inside.  When I drove the Elantra, it seemed wider, but it may be that you sit down and the windows are short.  It's sort of Dodge-like, especially with the slit for a rear window.

The driving experience was very Toyota-like.  Look at that list of cars.  Do you see a Toyota, Nissan, or Honda?  In my view, Toyota is like General Motors and Nissan is like Ford.  Honda isn't so dissimilar to Chrysler, except in reliability.  I'm not saying that everyone should have a car that wants to go fast around curves.  Some people might not be able to handle that.  When I first took my 1990 VW Corrado on my usual 10 hour trip to visit my parents, it only took 8.5 hours.  I didn't have to slow down much.

This Hyundai Accent has 14 inch wheels.  This will be a first.  The last time I contemplated 14 inch wheels would have been in the 1970s or maybe, the 1980 Ford Mustang.  I ended up with the TRX package with the 390mm wheels and tires.  I'm not sure but I feel as though I should change to 16 inch alloy wheels with H-rated tires.  It might not help, though.  The car also has rear drum brakes, something I have not had since the 1980 Mustang.

It could keep me out of trouble, though.  No more 90-100 mph, unless I'm on the back of a transport going that fast.  The Active Eco contraption has a switch, so it might be interesting to see how much the personality of the car changes.  However, it's still not going to have 230 lb-ft of torque as the Golf TDI did.  Of course, if they fix the emissions control on those vehicles, the TDI might come down more than a few.

Having a more passive car should be frustrating, but maybe, it will bring peace.  Then again, I might spend some of the money on enhancements. 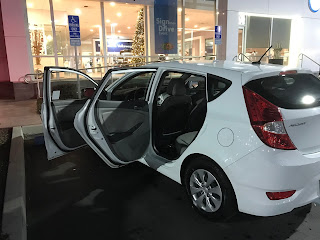 Update 2016.12.20: I've got the 2015 Hyundai Accent GS.  It's not awful but it's not great.  I'll learn to like it once I get my phone charger in there and set my radio stations and find some way to play the music from my phone.

I'm a little uncomfortable that the rear windows don't have extra tint.  When I drive with bags of photographic equipment in the bag seat, it's better I don't let people know.  Most of what I have, they probably wouldn't recognize anyway, and would have trouble selling, but they might break into the car anyway.

Tax, of course, wasn't cheap, and the dealer wasn't flexible on the price.  They do a search around the area and try to find a good price.  They saved me going to the DMV and that was practically worth any price.

The stereo isn't very good and Best Buy had a number of capable Kenwood models for under US$200, but fitting them properly may add a lot to the cost.  $200+ for parts and installation?  It's odd that all of the Kenwood, JVC, and Pioneer models they have support Chinese but not Japanese.  My Volkswagen was similar.  iOS and Android-compatible models start at about US$500.

The car, having the narrow tires on steel wheels, feels like an SUV ready to tip over during a turn.  I may come to a calmer experience with it but for now, I will be too reactive to avoid disaster.

Update 2016.12.22: I filled up the Accent for the first time yesterday.  It was an odd feeling because the filler door is on the driver's side and there is a release next to the driver's seat and I haven't pumped gasoline for almost four years.  The fill up only took something like 4.4 gallons--it was around half on the gauge.  I think the tank has something like 11.2 gallon capacity.  I drove a bit and it moved away from full rather quickly.  I saw the instantaneous mpg rating at 37 mpg for a moment or two, but it wasn't like I could hold that in normal traffic.  It seems 30 is about all it will do, even though the Active Eco system is engaged.

Update 2016.12.23: Driving in the rain was less dangerous than I thought it would be.  It wasn't confidence inspiring, either.

175/70-14 tires aren't exactly great in the rain when they're geared for low rolling resistance.  However, the traction control wasn't activated on slick roads.  It was activated last night on dry roads when I accelerated too quickly.  I'm looking for a better solution to the tires and wheels but it won't be easy to find a strong and low cost solution.  At 75 mph, it feels nervous.  Well, if I must, it feels nervous at 55 mph.  The engine screams like something from Suzuki, but the tires definitely don't feel a good match.

Update 2016.12.24: I went for fuel again.  Filling up took a bit longer but not long.  31 something mpg was all I got so far.  I turned off the Active Eco technology.  I'm not noticing much of a difference in performance or economy, although it waits for less pressure on the pedal to shift to the final gear.  Using the pseudo-manual Shiftronic mode could make things even better with some control of the process.  Unfortunately, this car doesn't have the shift paddles behind the steering wheel, as the TDI did.

Got my rear half of the car windows tinted.  It was relatively inexpensive at $179 something.   They did great work on my TDI.  However, I notice that the previous 20% and the current 20% seem quite different.  I suspect that they used 5% on the TDI.

Update 2016.12.29: Filling up lasted a bit longer.  I went for a drive to San Jose, which is about an hour's drive in itself, and then, all the side trips took a bit out.  During the trip up the foothills, I didn't push it quite as much as the TDI, which I usually let go at 90 mph.  I'm still not sure about the skinny tires on the Accent, but it handled 75-80 mph fairly well and 85 mph here and there elsewhere.

With Active Eco off and the extra trip, I got 32.91 mpg versus 31.20 mpg with it enabled.  It's by no means conclusive, but it is interesting.  I'm probably acclimating myself to the quirks of the engine and gearing.  They really should have put a Continuously Variable Transmission on the car to get the most out of it, but at least, they put a 6 speed automatic in there instead of 4 or 5 gears.

I don't believe I saw a quick 37.x mpg as I did with the Active Eco, but it didn't seem to make a noticeable difference anyway.  I've enabled the technology again to see if it actually helps.

Camera of the Year seems a big choice.  How do you choose?  There are so many things to consider.

Imaging Resource has decided on their choice: the Olympus E-M1 Mk II.

It's quite shocking, especially since I use micro Four-Thirds equipment every day I shoot.

In my opinion, humble or not, the FujiFilm X-T2 is the camera body that FujiFilm should have introduced as the X-T1.  The only reason the X-T1 seemed to catch on is because a lot of people in the 20s had never seen a camera with so many external controls.  They didn't really care what it could do, they were having a cameragasm.

That said, any of the choices were good, and it's a shame that the Pentax K-1 wasn't in the list.  I had the K-50 for a while and it was a very agreeable piece of equipment.  No one could say that it was way up there, but it competed at a level much higher than its price would suggest.  The K-1 does this also.  Its poor continuous AF is the only reason it hasn't been awarded.  Given that it has a 135 Format-sized sensor, I'd say C-AF is of little interest to those who have been chanting "full frame full frame" for years.  Their flowers and kittens will look fine with the K-1.

With all that, I'm still surprised that the E-M1 Mk II is Camera of the Year at Imaging Resource, but I value their opinions.  They really try the equipment and don't make petty remarks to suggest that they're brand fanatics.  If this had been DPReview or even the current What Digital Camera without Nigel Atherton, I would be skeptical.

I'd love to replace my E-M1 with the newer model.  It seems every bit the E-5 replacement that I wanted, without all the drawbacks I have found in the E-M1.  The one drawback is the price, and that has to come with a sensor with the 121 cross-type focus points, CDAF and PDAF.

Update 2016.12.13: Well, the Pentax K-1 did make it into the Best Professional and High End Cameras article, behind the Canon 5D Mk IV.

The Olympus E-M1 Mk II got Best Professional Mirrorless, solidifying the anger against it, especially from FujiFilm fanatics.  Sony was nowhere to be found.
Posted by Sakamoto Nobuyuki at 14:43 No comments: