I'm doing a quick entry here to start.  I just received a Nikkor 10.5mm f/2.8 DX format lens.  It's a used lens that was originally owned by LensRentals.com and sold by their liquidation division.

Buying a Nikon D7200 was mostly an experiment in order to get wider angle landscape shots more easily.  I've done that with the Tokina 11-16mm f/2.8 and Sigma 18-35mm f/1.8 lenses.  These are not particularly responsive lenses and from the start, they've made the D7200 feel unresponsive, especially for someone who photographs sports 99% of the time.  As I've slowed down because of my heart defect, I've been able to do more creative shots.  Still, I pick up the Olympus E-M1 and 8mm f/1.8 fisheye lens because of the difference in light gathering.

Oh, wait!  APS-C versus micro Four-Thirds can't even be close.  Well, I'm finding that real life is much different than examining a bunch of numbers and graphs.  People who don't shoot much have been telling me how much greater APS-C is.  The big difference I see between my GH4, GX8, E-M1 and the Nikon D7200 is that the Nikon body can record raw files with 14-bit depth rather than 12 bits.  Automagically, that increased the possibility of better dynamic range, color, and more.  Whether there is actually more is the real question.  I assume that there is.  Nikon has been good about wanting to deliver the best image quality.

In any case, I received the Nikkor lens about an hour ago and had lunch first, to give me some time to think.

To a certain extent, the difference in maximum aperture is offset by the higher ISO usability.  So far, I've found a maximum ISO sensitivity of ISO 4000 with the D7200 versus ISO 3200 for micro Four-Thirds.  Yes, you can go much higher and get something but for photographing sports, I have to be more careful.  Once it's fairly dark, neither is going to be okay without extra lighting.  However, auto focus on the D7200 goes down to EV -3 and the GH4 and GX8 goes down to EV -4.  I can't find a figure for the E-M1 but it has been decent in very low light, although it thinks a lot at that point.

Taking the Nikkor lens out of the box and wrapping, I was surprised how utterly small it is for a dSLR lens.  It's not much bigger than the Olympus micro Four-Thirds fisheye lens.  Yes, it's a DX format lens, so it can be smaller.  The best thing is that it can be used on the FX format camera bodies in DX mode.  (However, without weather-sealing and with a smaller maximum aperture, it isn't a surprise than the Nikkor lens is small.  If it had similar attributes, it would be much larger.)

As with all Nikkor lenses, I struggle to figure out which lenses are weather-sealed.  At full price of roughly US$775, I would expect that it would be.  That doesn't mean that it is, and from the description in the listing, I would say that it is not.  They mentioned some dust inside the lens--that did not affect image quality.  I've never had such a problem with my Olympus lenses, even though I'd used them out in hurricanes and in dusty conditions--severe circumstances.  Hopefully, the lens won't have a problem in bad weather.  I'm already hiding the lenses I have for the D7200 unless it is completely dry.  None of them are weather-sealed.

Hopefully, I'll be out shortly to actually shoot with it.

They both do very well.  I had to change the Nikon photo's white balance, probably because I'm still having new user problems.

Update 2016.04.01: I'm pleased to say that the Nikkor fisheye lens seems to work quite well, even though it was sold as used.

I've found the problem with the white balance control, but geez, what a maze to find it!  Olympus' Super Control Panel is amazingly helpful.  Even Panasonic's Quick Menu is more effective than the D7200's informational panel.  Perhaps, the D500 without a mode dial would be more efficient without looking at the display, but the D7200 way is not working as well as I would like.

As far as I'm concerned, Nikon has technological advantages over Canon, but Nikon is behind everyone else for user interfaces for quick adjustments.  I've heard that Olympus' menus are the worst but my experience is that all brands have crap for menus.

Back to the fisheye lenses, I haven't done extensive testing yet, but it would be a good assumption that I can use the Olympus combination much longer into the dark and still get sharp photos.  I may test the Nikon combination tonight to see if it will actually focus down to EV -3 or thereabouts.   My previous experiences with the Sigma 18-35mm f/1.8 ended in failure.

Looking a bit closer, there is fringing.


The Olympus combination shows less fringing, but I wonder if there is software correction affecting the outcome, since micro Four-Thirds bodies fix things too often.  I suppose I'll try to put it in the GH4 or GX8 to see what happens.  I'm usually too busy shooting to test.
Posted by Sakamoto Nobuyuki at 13:56 No comments:

DirectAT&T gave me no TV

I am not amused.

Thursday night/Friday morning, the new AT&T/SBC decided to "enhance" my DirecTV experience with their logo.  When I started the receiver the next time, I saw the new logo--and that satellite 1 could not be found. 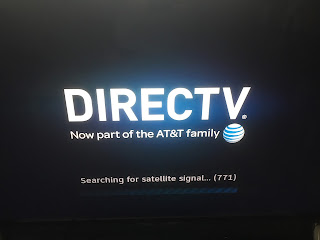 The dish is in place, the receiver has not otherwise been changed or unplugged, but I now have no TV.

I thanked both companies over Twitter, so other people might see.  They were looking into it on Friday.

So, it's been four nights since the update and three days without DirecTV--how is that for 99% reliability?  Give AT&T a working product and they can damage it.  I had a feeling that this would end up worse, given the various problems I'd had with Cingular/AT&T and why I would never deal with them again.

At this point, what do I do?  I will call them, of course.  The receiver can't be updated because it can't get the signal from the satellite any longer.  I tried to go through setup tonight and it had some lag, so I switched to doing something else and the receiver powered itself off.

As far as I'm concerned, they can take their equipment with them and never bother me again.  Alternatives?  Dish Network is a "hell no", as they used to hang up on my mum and we learned right before her death that they had no clear path and the installer just said that it was okay.  Comcast/Xfinity isn't a good choice.  I've heard so many bad experiences from as far back as when they only serviced the Philadelphia metro area.  Every time my mum talked to them, they told her that the problem was in her set.  They weren't receptive to me, either.  At one point, their box would not change channels for 5 minutes, probably because someone was using the company's internet services in the neighborhood.  They replaced the remote 3 times and the box 2 times.  She canceled and went to Dish Network.

I'd only dealt with two major cable companies: Time-Warner and BrightHouse Networks and both were disgraceful.

Well, I think I'm out of luck this time.

Update 2016.03.28: I called the service number and I waited a lot.  The first automated message was something about Monday being their busiest day for call volume.  Eventually, someone answered, and I was surprised.  I was treated well and felt that they cared.  This is much different than my experiences with cable companies.

Update 2016.03.29: The DirecTV service person arrived--and naturally, everything was working.  He checked everything and it was all fine but told me to turn off power savings mode.  It had also recorded some programs from Monday night.  Who knows?

Update 2016.07.20: I'm generally happy with the service but AT&T continues to pull the logo in every nook & cranny that they can find, including all over the iOS app.  Having no bug fixes or performance improvements but having to update the app seems ridiculous.

Update 2016.08.24: Apparently, AT&T thought that it would be a great idea to stop allowing searches without the box being connected to the internet.  This probably has something to do with their desire to integrate customers into their internet services.  I'm not thrilled with heavy-handed tactics because it reminds me of the cable industry.

Checking on my recordings seems to not work well, even though the recordings are held locally in the box.  Often, I get a blank display.  In fact, the Guide also seems to work this way.  Sadly, these "enhancements" have been happening since AT&T officially took over DirecTV.

I'm ready to cancel my service, but I suspect that AT&T will charge me much more than the almost minimal cancellation fees at the end of my 2 year contract.  I suspect when they took over, they decided that they could re-work my contract to start at that point.  To say that I don't trust them would be an understatement.  I hope I'm wrong.

Update 2016.10.04: As of today, I have no TV service.  It's the first time since 1986 that I didn't have cable or satellite-supplied TV service.  As I'm dying, I just wanted to clean up as much as possible ahead of time.

I tried a couple of Apple TV-related apps today and the video was quite good.  If I can afford the video over internet usage, I might be okay for the occasional use.

Update 2016.11:30: I've watched one or two full-length TV shows at the first of the mobile hotspot's month in order to avoid any unforeseeable overages from Verizon.  It's amazing when you have about 500 MB remaining and you have the equipment powered off that it still manages an overage of 1.5 GB.

Quality seems fine through Apple TV, although it doesn't do 4K with the current equipment.

DirecTV/AT&T has announced a streaming service with multiple plans.
Posted by Sakamoto Nobuyuki at 02:09 No comments:

It almost seems as though Sigma is doing this for bragging rights alone.

Mostly, I photograph at skate parks.  That requires very responsive camera bodies and lenses.  So far, the Nikon D7200 and Sigma 18-35mm f/1.8 lens combination has been better at wide-normal casual situations.  Obviously, the lens isn't part of Sigma's Sport line but is part of their Art line.

The two Olympus lenses were part of their Super High Grade line, which meant that they could be used in any situations requiring the utmost quality and weather-sealing--and that they were very costly, somewhat above US$2000.  I've used the 35-100mm f/2.0 lens for indoor high school sports such as swimming and basketball.  The almost 3:1 zoom is 135 Format equivalent to 70-200mm, and not a bad range.

The trouble with the Sigma 50-100mm f/1.8 lens is that it has a limited range, similar to the 18-35mm f/1.8 lens.  Occasionally, I switch the D7200 from DX coverage to 1.3x, to effectively extend the far end of the lens.  It uses less of the sensor and therefore, less of the lens, so image quality should be improved at the edges.

I was watching a video espousing an opinion about the lens and it was somewhat amusing.  I'd never seen that person's videos or web site, but the video was mistaken, at least, on the Nikon side about the possibilities for use of the 50-100mm f/1.8 lens.

Posted by Sakamoto Nobuyuki at 01:26 No comments: