The trouble with both was the relatively small aperture of each.  I don't really photograph landscapes, so using the 7-14mm indoors might be a problem without substantial lighting.

Equally, the 8mm f/3.5 fisheye lens was not enough for interior or lower light work at skate parks.

They're all weather-sealed.  I doubt seriously I'll be doing work at skate parks in the rain, but I suspect that these lenses will be great for many more situations. 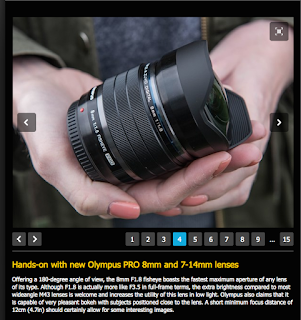 According to DPReview, the 8mm f/1.8 fisheye is not really f/1.8.  While they are referring to the effective depth of field, they insinuate more.  I suspect that the shutter speeds used to make use of the maximum aperture will reflect f/1.8, regardless of DPReview.  Their bias against Olympus has been so strong that Olympus refused to send them an E-3 dSLR review unit.

Update 2015.06.29: I went to the camera store to see about the lens.  They have no idea when it will arrive.  Apparently, the only information is that two of us have ordered it.  I'm wondering, as much as they ignore the California stores, if the Colorado stores are getting them first, regardless of when we ordered.  I should have gone with Adorama.

Update 2015.06.30: I returned today and talked to the manager in a firm, but pleasant tone of voice.  I told him that I didn't think that being told "whenever" as a delivery date was acceptable, and that my money didn't seem to be important to the sales person.  He agreed and swore to impress upon that person (through torture, if necessary :-D ) that sales requires a bit more finesse.  The money has been pushed back to my account, but of course, that doesn't happen immediately, does it?

A few minutes later, across the street before entering a store, I called Adorama, checked to see if they had the lens in stock, and they had just received 10 of them.  I should have it Thursday or Friday and I'm using 2nd Day Air.  It could arrive the same time regardless, but UPS will artificially hold packages, even when they don't have enough deliveries, unlike FedEx.
Posted by Sakamoto Nobuyuki at 23:51 No comments:

Mirror-less, interchangeable lens cameras have been mainstreamed for around 6 years

Panasonic had very little success with the DMC-L1 or the DMC-L10 and partner Leica didn't really do much with the Digilux 3 dSLR.  Olympus had more like with the E-330 (like the DMC-L1 or Digilux 3) from that time, bringing Live View to the masses.

However, Panasonic, by itself with the G1, made people think.  It was a dSLR-style camera body and the controls were similar enough that it didn't confuse.  It was just that there wasn't much available, especially since Olympus didn't have anything ready.  If not for the Four-Thirds lens adapter, there would not have been much available at all.

If my skepticism was strong for micro Four-Thirds, it was impossible to break concerning Sony's NEX-system.  It still doesn't have very good support since 2009 when it arrived.  FujiFilm has certainly surpassed Sony in many ways, most prominently in lenses.

Samsung has once again come with something, and it's not a Sony clone this time.  The NX1 and the NX500 actually seem useful.  It took them several generations of crap, and they barely have any lenses or industry support.  I wondered if they would have transitioned their name to Beta, to match Sony's change to differentiate themselves from the copier.  It might be interesting to see if Samsung could manufacture (micro) Four-Thirds sensors for Panasonic, Olympus, and those hiding behind the Kodak name.

Sony has recently shown that they have created a 20 MP sensor for (micro) Four-Thirds, which is interesting, if it can improve only low light photography.  ISO 3200 seems my reasonable limit.  However, seeing the Pentax K-50 with a lower pixel density at ISO 3200, it seems APS-C is not really better, even though the high limit of the K-50 is ISO 51,200.  Perhaps, with a higher resolution lens, it would be better.

Of course, Sony's 135 Format A7-series is much more interesting, as far as technology goes.  As far as lenses go, my skepticism is very high.  Adapters are much more necessary than they are with micro Four-Thirds.  For my use, a dSLR is still better but for those who don't photograph sports, the A7 Mk II looks a treat.  For people who don't mind huge lenses, and back-breaking backpacks, 135 Format is great, mirror-less or otherwise.

I've been looking at old lenses recently and it's amusing to see the old crap that I used to have to sell because there were so few great lenses.  I'm so thankful for the digital revolution, especially since Olympus' Four-Thirds lenses made things so much better.

The company has been making headway with their "PRO" series lenses, despite the silly name.  The 12-40mm f/2.8 is quite good, especially for just under $1000.  I wish they could have put a bit more of the ZD 14-35mm f/2.0 goodness into it, but it would have raised the price, and increased the size and weight to where the lightweights would have complained.  However, a 67mm filter size might have allowed an f/2.5 maximum aperture instead of f/2.8.  I've used the ZD 14-35mm f/2.0 with the Panasonic GH3, so a 67mm or 72mm filter size wouldn't have bothered me--the closer to f/2.0 the better.

Thankfully, Veydra, a crowdsourced startup is working on making affordable cine lenses of a uniform size for micro Four-Thirds.  Competing with Zeiss' Compact Prime series will be difficult, but does everyone need Zeiss?  With a lack of electronic connections, these are for the serious users who want to control their imagery, just as those from Zeiss are.  The prices are quite different between the two lines.

While Canon, Nikon, and Pentax have all created mirror-less models, they seem afraid to encroach on their dSLRs, and have given somewhat too interesting alternatives.

FujiFilm has been the most exciting company in the market, with some interesting choices.  They have the best selection of lenses for any APS-C sized sensor camera bodies.  While they've been stuck at 16MP, that isn't necessarily a bad thing, considering the lower pixel density.  The X-T1 is a valuable body with a great EVF and enough dials to make enthusiasts' eyes spin in their sockets.

The company continues to update the firmware with fixes and new additions.  It almost seems as they've kicked Panasonic and Olympus into update mode, also.  For me, the X-T1 could have more of a grip and since there would be more room, a bigger battery.  I haven't tried the X-T1 since the 50-140mm f/2.8 lens has become available, but I wonder about the balance.  There are many times when a dSLR still feels just right for shooting sports.  However, I rarely pull out a dSLR these days.

For the majority of camera users, mirror-less models make sense, especially for those who buy a base dSLR and only use the kit lens and set everything to Auto.  Sure, you can take good photos with those, but the same can be said for cameras without the mirror slap.

One thing about mirror-less camera bodies remain--the many acronyms.  MILC seems to fit best because they are indeed Mirror-less, Interchangeable Lens Cameras.  ILC could include dSLRs and rangefinders.  CSC (Compact System Cameras) wouldn't have to have interchangeable lenses.  EVIL doesn't seem to fit as things have progressed since the original Panasonic DMC-G1.

MILCs haven't taken control of the market, but I can see when the crowd is better informed, that they could.

Update 2015.11.06: I just noticed that DPReview wanted the world to see Ming Thein's article on mirror-less cameras.  The backlash was mean.  Of course, this just means that people didn't agree with his assessment--or that he stepped on their toes, rejecting their choices.  A certain Sony user was particularly aggressive.  I think I've met that user online a time or two.

I agree with most of his assessments.  He apparently had not used the Panasonic GH4, which for me, is as close to the perfect mirror-less body as is possible from one company.  He is working from the point of view, like mine, about getting things done.  I want to get the shots I need (accurately) and get to the next job without the camera getting in the way.
Posted by Sakamoto Nobuyuki at 15:29 No comments: