Given that I had almost 14 GB in my monthly internet allotment remaining, I decided to try to download the latest operating system and install it on a laptop computer that I've had since around the first of 2013.

In November 2014, I had Apple install 10.9.5 on my machine because I didn't have enough data available to download the operating system.  I also remember all the pain of downloading 10.8 and the fixes and having to jump through hoops to get it to work, and then, I changed to an SSD and I couldn't just copy the operating system as in the old days.  Gnashing of teeth was part of the installation process.

The time for the download was not horrible, although my Verizon mobile hotspot has some very variable service lately.  Once downloaded, there were a couple of items to confirm and then, it restarted to actually perform the installation.

At some point, it asked me about iCloud--and took a very long time to complete.  It also did this for a secondary user on the machine, but didn't seem to take nearly as long.

That was the big deal.

Performance is much better, although the interface is so flat (with sharp edges) that I suspect that the next major version will have concave features.  It feels a bit as though children were tasked with the re-design.

I haven't seen a problem, other than having to update all of my iWork applications.  Why they are so close to the operating system, I don't know but it feels like when Microsoft was using hidden APIs to "enhance" Microsoft Office since the compiler couldn't fix the code execution to be faster.  Oh, and my 14 GB remainder is suddenly about 3GB.

Update 2016.04.05: There is a huge drawback that most people won't likely see.  When I try to transfer over 500 photo files from SD cards using my USB 3.0 enabled reader, the Finder seems confused.

It seems to create ghostly icons of the files in the folder but never seems to actually copy the files.  It doesn't report any progress.  I end up having to re-launch Finder, delete the files' icons--or whatever it takes, depending on my level of frustration.

There is also a problem while transferring around 400 photo files, but this has been lessened by 10.11.4.  Progress stalled quite a lot with 10.11.3 and shaking the Copy dialog box seemed to help.  It's smoother now but once it's stuck, nothing helps.  I could try using the inbuilt SD Card slot but it didn't seem to work in previous releases, so that's not a good idea.

Why is Apple having USB problems after all this time?  I've thinking that the all-in-one iMac from the 1990s had severe USB problems but that was so long ago.  Then again, every major release (including iOS) seems to have WiFi problems.

Why isn't Windows 10 such a problem?  I'm surprised that things work so smoothly.  I suppose Apple's problems could be related to their lack of procedures.

The good thing with 10.11.x is that the App Store works reliably.
Posted by Sakamoto Nobuyuki at 23:12 No comments:

There may yet be hope for FujiFilm's cameras: X-Pro2

The X-Pro2 got quite a few enhancements, but especially the new processor, new sensor, and weather-sealed body.

I avoided the X-T1 because of its laggy nature.  If you think I'm wrong, you haven't used Olympus and Panasonic mirror-less bodies, which are extremely responsive--or you've been using a Sony camera body, which is less responsive than the FujiFilm bodies.

My first SLR was a Fujica ST-605 and I've been interested in having a new, digital camera body from FujiFilm.  The X-T1 fit nicely, but it just wasn't good for me.

With the X-Pro2, we may see improved low light capabilities, especially if the new processor is better at careful noise removal, and of course, if the new sensor is using much better technology to offset the increased pixel density.

It may be a while before we see any note about a change to the typically waxy skin tones that FujiFilm bodies have been providing.

One thing I noticed that was not overtly mentioned was whether raw files can be used past the normal ISO sensitivity range.  In the past, they indicated that files outside the normal range would be JPEG files.  Considering that high ISO sensitivities could use more adjustment for files, it was frustrating that FujiFilm bodies would only provide JPEG files.  If that has changed, it's a major step forward.

I hope that the new, higher resolution sensor doesn't cause more problems.  Naturally, raw development software has to embrace the new files.  Hopefully, they're great at decoding the files after a few years.  FujiFilm labeled the new sensor X-Trans III but hopefully, decoding works the same.  Phase One Capture One has been very good at processing the files, but hopefully, Adobe will become much better one day, since so many rely on their software.

Considering my Nikon D7200 has 24MP and a native ISO sensitivity range up to 25,600, I wonder how usable FujiFilm's files will be in lower light situations.  Someone mentioned that the sensitivity numbers don't match between FujiFilm and Nikon.  We obviously need a certified test to make certain we can move from brand to brand and body to body and get the same response within a small percentage of error.

All this makes me hopeful for the X-T1 replacement.

If the X-T1 replacement is responsive, flexible in usage, and a bit more powerful without being a problem for itself, I'd like one.

Update 2016.01.17: I was just looking at a comparison between the Nikon D500 and the X-Pro2, which made it look as though the X-Pro2 won.  For me, the X-Pro2 is a good camera body for casual photography, such as travel photography, but getting work done is something that the D500 will do well.  Considering the price, they're not that far apart but I see the X-Pro2 as an expensive competitor for the D7200, Olympus E-M1, Panasonic GX8, and possibly the Sony A7 Mk II, another casual camera body.

It's a most serious threat to Leica, since it does most everything that Leica bodies do well, and it saves you enough money that you can also buy lenses but it still has that emotional connection than a rangefinder would have, especially with the hybrid viewfinder.

Update 2016.07.11: The X-T2 was announced the other day.  It looks really good.  The dual card slots, battery grip that holds two batteries and that has a boost mode seems like they're ready to take on Nikon D7200.  I wonder if I would have chosen to go there.

A couple of years ago, I looked seriously at the X-T1 and didn't want it because it was too slow, too weak.  I'm not sure of the responsiveness of the X-T2, but if that has improved to dSLR or micro Four-Thirds levels, the X-T2 is an easy choice.

Update 2017.01.01: It looks as though the X-T2 and X-Pro2 are very, very good, but the auto focus is still not quite right.  They've both won a lot of praise, but some criticism for not being everything that they should be.  It's odd to me that they can't get the AF nearer to 100%.  That said, Panasonic really needs to fix theirs on the GH4 and GX8.  It's still better at finding large objects like walls instead of people.  Olympus does better since face detection is added to whatever AF configuration you're already using.

FujiFilm has a good handle on things but they really need to step it up if they're going to have more than a cult following.
Posted by Sakamoto Nobuyuki at 13:52 No comments:

Nikon has just announced the successor to the D300s--the D500.

It has a sliding, touch-enabled rear display of 3.2 inches.

While it does Super35-compatible 4K video at 30p, it doesn't seem better than the Panasonic GH4 at this point, for video.  (Apparently, the D5 does fewer than 4 minutes of 4K video?)

I have not found the D7200 enough of a breakthrough model for me, nor the move (for me) to APS-C to be more than marginally better than micro Four-Thirds, unfortunately.  I am pleased with the D7200 for wide work, but it is sufficient, not exceptional.  Perhaps, hopefully, the D500 is exceptional.

Oh, and if you're wondering why there is no D400, it would have arrived at the same time as the D4, but they supposedly couldn't give it enough of a difference to create such a flagship DX model.

Update 2016.06.27: You've probably seen plenty about the D500 by now.  It's quite tempting.  It should be since it securely replaces a model from 2007.  Although opinions differ, for me, it is the pinnacle of APS-C equipment, not the FujiFilm X-Pro 2. 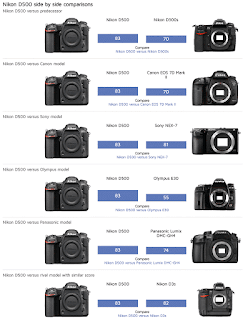 I was quite amused that DxOMark used the Olympus E-30 as a model for comparison.  Was there someone at the company who held tight to the E-30?  Seeing the E-30 at 55 and the Panasonic GH4 at 74 shows how far micro Four-Thirds has come.  I'm not sure I believe a score of 83 for the D500 and 87 for the D7200 because the D7200 doesn't seem quite so wonderful and the newer Expeed 5 class processor along with a slightly lower resolution should give better, not worse results.  Then again, I don't really believe DxOMark numbers, except as a very general guide.