Every year around Christmas here, I complain that the shopping area has horrible service with Sprint.  As of the Christmas season 2018, I can complain about it no longer.  We didn't get 100 Mbps service but the service was never unusable as it had been in the past few years since I arrived in 2014.

Further, I had jury duty in Stockton, which has generally had the worst of everything and I had a solid 4 bars downtown, especially on the 7th and 12th floors of the court house, but even on the ground it was exemplary.

I haven't had a lot of praise for Sprint, except for EVDO/3G in 2005 when the others were far behind them, and several years later when WiMAX was delivering data well before LTE was available in even a few places.

I'm pleased to say that the company has done better lately and I'm not sure why but I hope they continue to improve.  I'm almost okay with the T-Mobile merger, as long as we don't end up on GSM.  I hate having a voice conversation with anyone on T-Mobile because of the way it distorts and echoes.

VoLTE (Voice over LTE) should have been implemented already, so that we could rid ourselves of GSM and CDMA.  I expected it would be in place in 2015, even if it wasn't widespread, but it doesn't seem to have gone very far at all.

Update 2019.02.24: Sprint is now advertising that LTE Advanced is in use.  They also have "Calling Plus" for Android-based phones, which appears to be VoLTE, as they mention that you can use the internet while on a call, etc. 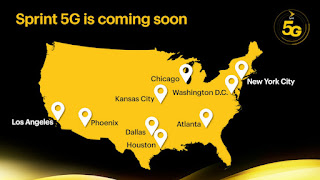 Apparently, 5G service will be launched in a few cities in May.  It seems that they've not bothered with Philadelphia or Miami, which is a big change from earlier times.

Don't you love how AT&T/SBC is finally going to LTE Advanced and is calling it 5Ge, as if it's something better than everyone else.  It's similar to when they enhanced their 3G service and called it 4G, even though it wasn't much different from T-Mobile.   By the original definition LTE Advanced is 4G, and we're not quite there yet, as far as a nationwide implementation goes.  I still see 1xRTT on occasion.

Update 2020.02.17: Apparently, 2020 is the year that 5G will penetrate our lives.  According to news, Verizon couldn't cover the Super Bowl stadium with 5G service, so I'm not sure how great it's going to be.  I'm still waiting for 4G/LTE Plus to be everywhere--and for 2G to go away.

Update 2020.04.24: The Sprint/T-Mobile merger happened and the two companies are cooperating on LTE, but will remain two operations otherwise.  I'm glad that they're not getting rid of CDMA.  I wonder if MetroPCS is still using CDMA, as they were prior to their acquisition by T-Mobile.  They were known as the worst carrier, but I'm not certain that they were the worst.

In any case, it should be interesting to see how everyone's service goes.  Hopefully, it's better and Verizon and AT&T sweat some.
Posted by Sakamoto Nobuyuki at 23:38